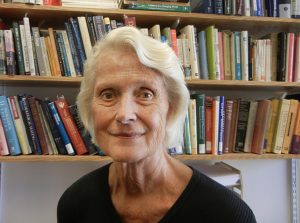 Dr. Phebe K. Cramer, a pioneering, prolific, and long-serving professor emerita of psychology, passed away on Friday, April 2, 2021. She was 85. In her 39 years at Williams, Prof. Cramer published widely, taught numerous courses in developmental psychology and child psychopathology, maintained an active clinical practice, and worked to advance the standing of women at the college.

Prof. Cramer earned her B.A. from the University of California, Berkeley and her Ph.D. in clinical psychology from New York University. When she joined Williams in the fall of 1970, Prof. Cramer was only the fifth woman on the faculty. Over the course of her career, she became the first woman to hold the position of full professor at Williams, the first to chair a department, and the first tenured female professor in the psychology department.

She was highly prominent in her field, pursuing a fruitful research program focusing on defense mechanisms, personality, and child development, out of which came more than 90 scholarly articles and five books. Additionally, she was an active clinician, holding staff positions in several hospitals and institutes in New York, Massachusetts, and beyond.

Professor Emeritus Saul Kassin, who worked alongside Prof. Cramer in the Psychology department for more than 25 years, said that “Phebe was the consummate productive scholar, one of the world’s leading researchers on defense mechanisms, development and measurement.” Further, he added that Prof. Cramer “was a pioneer, and a force. She set high standards— for herself and for others.”

Prof. Laurie Heatherington shared a similar perspective. “I had people come up to me at conferences to ask about her and her work, which really had an impact on the field,” she said. “She was especially well known for devising an empirical method for studying defense mechanisms and for her work marrying personality, developmental and psychodynamic theories.”

Moreover, Prof. Heatherington—who was the second female tenured professor in the department after Prof. Cramer—underlined the pioneering role Prof. Cramer played as one of the first women hired into the faculty at Williams.

“As a young mother, she worked at a time when there was no day care center, and little understanding among one’s colleagues of being a full-time academic and a parent,” Prof. Heatherington said. “She persevered, and was amazingly active and accomplished well past her retirement. We were all proud that she was our colleague.” Further, Prof. Kassin noted that Prof. Cramer co-founded a committee that fought for and won salary equity and maternity leave for women.

Prof. Cramer’s high standards allowed students to pursue big ideas. A former thesis student of hers, Dr. Gail M. Ferguson ’01, is now an Associate Professor at the University of Minnesota’s Institute of Child Development. Dr. Ferguson returned to Williams last month to give a lecture as part of the Class of 1960s Scholars series, and in the colloquium she paid tribute to Prof. Cramer for helping to start her research career.

Reflecting on her ideas for her senior thesis project, which involved data collection in both urban and rural settings in two countries, Dr. Ferguson said that Prof. Cramer “fanned the flame rather than trying to talk me out of ambitious ideas.”

“I am so grateful for her mentorship and carry pieces of her legacy as I mentor my own students,” she went on. Prof. Cramer and Dr. Ferguson later published that thesis research in the Journal of Cross-Cultural Psychology and the Journal of Applied Developmental Psychology.

As with her students, Prof. Cramer is warmly remembered by former colleagues, such as Professor Emeritus George “Al” Goethals, who arrived at the college in the same year as Prof. Cramer. “During the 35 years we overlapped we collaborated, argued, and laughed, always with an underlying respect and warmth,” he said.

After her retirement in 2009, Prof. Cramer stayed remarkably active as a scholar, publishing more than 20 articles or book chapters in the following decade. During that time, she also pursued her love for world travel and stayed in touch with former colleagues and students.

“She lived such a full life and always inspired me with how she prioritized her personal exploits (e.g. annual global trips) alongside her insatiable intellectual appetite (e.g. continuing research and always attending new data analysis workshops, well past retirement),” Dr. Ferguson said. “Phebe never waited for life to happen, she made it happen. She was adventurous and fiercely independent, yet still connected to those she loved.”

As testament to her extraordinary abilities and interests, it bears mentioning that Prof. Cramer was an outstanding athlete in her youth: according to the Berkshire Eagle, she set 10 American records and one world record in the 100-yard butterfly, and she participated in the Olympic trials in 1952.

Across more than two decades in the psychology department together, Prof. Kassin said, “My most prominent recollection was of Phebe leading the annual faculty procession at commencement ceremonies— one of the first women hired to the Williams faculty, tall, statuesque, and at the head of the line.”

Please visit the Covid-19 website for the latest information, including details about vaccination, testing and mask requirements, and policies for off-campus visitors.