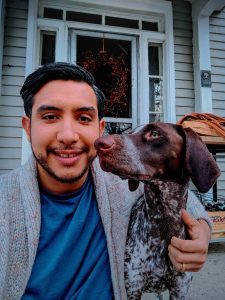 Last week, Shaheen Currimjee ‘20 spoke to Professor Victor Cazares, who will be joining the Psychology Department as a neuroscience faculty member. He will be moving from Ann Arbor, MI, to Williamstown, MA, on June 15th, 2020. Check out this interview along with other articles on Twitter @PsychologyEph.

SC: Good afternoon, Professor Cazares and thank you for sharing your story with us! Why don’t we start with what attracted you to Williams and our Psychology department?

VC: Thanks for having me! I knew that I wanted to end up at a liberal arts college because I’m the best scientist when I’m around students. As people are learning, they also tend to ask the best questions at a liberal arts college because they’ve been trained in a multidisciplinary way and encouraged to explore different fields. This creates a valuable place to gain perspective and new ideas for my research and teaching. I also always try to pick a place that has a sense of community, where people are invested in one another. When I visited Williams, I had an amazing time; everyone was so nice and the conversations were so academically stimulating that I felt the need to go back.

SC: I’m so glad we made such an impression on you when you came to visit! You mention the different facets of psychology, so how did you become interested in neuropsychology?

VC: I’ve always been interested in behavior and why people do the things they do. In community college, I took an abnormal psychology course, and it was the idea that in certain situations, like in schizophrenia, people’s reality could be changed so significantly that really fascinated me. I also volunteered in a lab and the merger of being interested in psychology and seeing how the scientific method could be used to answer some of the questions I had got me down this road of wanting to be a career scientist, involved in both research and teaching.

SC: How would you describe neuropsychology to someone who didn’t truly understand what the profession is all about?

VC: At its essence, neuropsychology is a study about ourselves, learning more about what makes humans us. It’s a way that, at least for me, captures the special thing that goes on in our brain cells. Compare a baby with an adult and think about all the changes that have happened, all the experiences and emotions that make that person who they are as an adult. All those things have to live and be stored somewhere. Neuroscientists have an assumption that that place is the brain. Neuropsychology figures out where in the brain and how those features are generated in real-time and live on forever.

SC: What are some courses that you’ll be teaching in the upcoming year?

VC: In the Fall, I’m scheduled to teach a 400-level course on feelings and emotions. The goal of the class is to distill what emotions are, how they shape our behavior and identity, and how they shape society and how society shapes them. In exploring these questions, we’ll consider how the brain generates emotions and how emotions affect the brain. I’m particularly excited to bring together students who have navigated diverse paths through the department as this diversity of perspectives should make for really interesting discussions. In the Spring, I’ll be teaching an empirical course on the relationship between genes and the environment and how they predispose people to psychological disorders. The lab part of this course will be to learn about the strategies of rodent model systems in exploring these relationships.

SC: Of course, professors don’t just teach –– they also conduct research, and I know that you’ve just recently published a paper of your own! Could you tell us a little about your latest work?

VC: Sure. The main goal of the paper is to bring attention to a specific method used to understand psychiatric diseases. Neuroscientists who use mice for their research should consider using mice that are genetically diverse. Typically, most neuroscience use mice that are genetically identical — clones of one another. But my approach is that if you increase the genetic diversity of your subjects, then you’re better able to figure out what a drug does because now you can measure those changes in individuals that are different. If you take the analog in humans, you would never test the effect of a drug just on one human and you also wouldn’t test the effect of a drug on 100 humans that are genetically identical.

SC: I’ve never heard of this type of population sampling before, but your logic makes a lot of sense to me! Especially since as you say, the genetically identical testing approach just seems silly when we think about it in a human context.

VC: Yeah! I’m not the first person to advocate for it but it’s definitely an underutilized strategy.

SC: Will you have a lab at Williams to continue this line of research?

VC: Yes, I will have a lab and I already have a thesis student! I will definitely be recruiting more students. The early work will be focused on models for anxiety and depression disorders. For example, how do different genetic backgrounds and environments predispose individuals towards anxiety or depression and what factors make them resilient? The hallmark of my research is, what makes you resilient and what puts you at risk.

SC: How would you convince underclassmen to take an interest in psychology?

VC: Well if I was going to give myself advice as an underclassman, I think one of the most valuable lessons I’ve learned is that your life and career are enriched by having the most diverse set of experiences as possible. When it comes to a major, psychology provides a pretty wide breadth of study topics. Being in a field like psychology just exposes you to so much different information that not only is it interesting but it’s also applicable to many careers.

SC: I couldn’t agree more! Now in the last few minutes, let’s get to the good stuff. Just kidding, but I would love for our readers to get to know you beyond the classroom too. So, what’s your favorite fun fact?

VC: I lived in a rural part of Mexico for five years, where horseback riding was still a major method of transportation.

SC: Wow! Do you know that Williams has an equestrian club? You should check it out.

SC: Okay, I saw from your Twitter that you’re a hot-sauce connoisseur. How’d you get into that and what’s the hottest sauce you’ve ever tasted?

VC: So, how I got into that is mainly cultural. I’m a first-generation Mexican-American and growing up, it was the thing to have fresh salsa or dried and pickled peppers with meals. As I became an independent adult and didn’t have the time to make these fresh pickles, I started getting into buying hot sauce. Currently, I have 15 hot sauces open in my fridge. Each of them has a better food pairing. I typically don’t go for the super hot ones because then it’s all heat and no flavor. But out of the hotter ones, there’s a brand called Yucateco and they have a triplex, extra hot one. It’s super spicy but still has a nice flavor profile.

SC: I have a very low spice tolerance, so I’ll have to take your word for it. Anyway, thank you so much for your time, Professor Cazares. I wish you all the best for your time at Williams!

Covid-19 is an ongoing concern in our region, including on campus. Safety measures are in place, and campus community members and guests are additionally advised to take personal precautions. See the college's Covid-19 website for information about campus policies. For the latest research and recommendations from the CDC, visit cdc.gov/coronavirus.